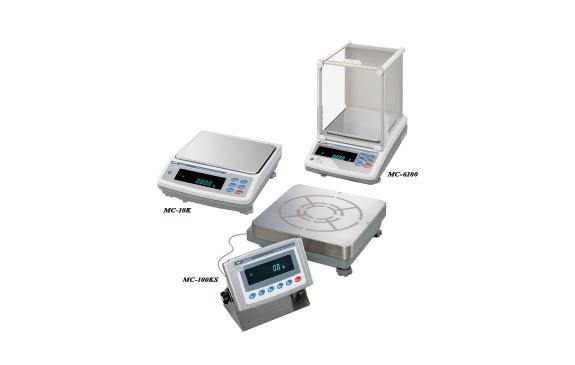 Data Memory Function (up to 200pts)

Electronic balances have expanded their market scale through usability and low cost but their measurement principles have not fundamentally changed since they were developed. New measurement principles for weighing have not been proposed for decades and mass traceability is still guaranteed by 1 kg standard in France. Of the seven SI units (length, mass, time, current, temperature, luminous intensity, and substance (mole)), only mass requires a physical guarantee of accuracy. Because of this requirement, mass is considered a specialist field that requires accuracy management with a calibration weight. This is one reason that high-resolution balances are needed as mass comparators.

The practical measurement principles of general-purpose electronic balances fall under the following four methods: electromagnetic equilibrium, strain gauges (load cells), electrostatic capacitance, and tuning forks. The technological background of each method will be briefly described below.

1.    Electromagnetic equilibrium: This method uses a fulcrum and lever. For example, an unknown mass is placed on the left side of a lever and a balancing force is generated on the right side of the lever through the fulcrum. Electromagnetic force is used to generate this force. The electromagnetic force mentioned here is Lorentz force, as taught in high school physics classes using Fleming's left-hand rule. In other words, when current flows perpendicular to magnetic flux flowing in the magnetic circuit, a force is generated in proportion to the current at a right angle to the flow of the current and the magnetic flux. The current required to balance the mass (force) on the left side of the fulcrum determines mass. The resolution acquired by this method is very high for a balance. For a general-purpose balance, the rate of the minimum display value called sensitivity against the capacity is about one over several hundred thousand. Mass sensors that use electromagnetic equilibrium are mainly used for high-resolution electronic balances and there are analytical balances with resolutions of one over several million to several hundred million. Analytical balances used in research require high sensitivity and currently most use the electromagnetic equilibrium method.

2.    Load cells: Using electrically resistant wires called strain gauges, load cells detect the strain caused by a load as a change in the electrical resistance. Several strain gauges are affixed to what is called a spring material, which has a Roberval structure. Since the strain of metal used in the elastic deformation is very small, a Wheatstone bridge circuit is used to detect the difference of the contraction and elongation detected by the strain gauges and increase output level. Commercial products using this method achieve practical resolutions of one over several thousand to a hundred thousand. Electronic balances that use strain gauges are used in a wide range of fields, including part management in production facilities and for academic experiments.

3.    Electrostatic capacitance: This method uses a Roberval mechanism with electrodes to detect capacitance changes in two areas, the area displaced (moveable area) and not displaced (fixed area) by the load. Displacement by the load changes positions among the electrodes. Accordingly, the change of electrostatic capacitance among the electrodes is used to measure mass. Resolution is typically one over several thousand or below so this method is generally used for low-resolution instruments like kitchen and bathroom scales.

4.    Tuning forks: With the tuning fork method, the natural frequency of a tuning fork is changed by tension (load) applied to the tuning fork. For example, a mass is placed on the left side and a vibrating mechanism placed on the right side via a fulcrum. The vibrating mechanism detects excitation and frequency using a piezoelectric element. If the mass is changed, the natural frequency varies accordingly. This results in a change in free vibration frequency with the same excitation, which is used to acquire the mass. Since the frequency is counted to acquire the mass, no analog/digital conversion is required, unlike the three methods above. The tuning fork method has a resolution of one over several tens of thousand to several hundred thousand, giving it a performance level between the electromagnetic equilibrium and load cell methods. It is used as the mass sensor of general-purpose balances.

While the four methods have their positives and negatives, the electromagnetic equilibrium method is fundamentally different from the other three methods from a technical point of view. In the electromagnetic equilibrium method, the force equilibrium is achieved without changing the lever position via the fulcrum. The mechanism is always controlled to return to its original state. This method follows the principles of balances made centuries ago. It is referred to as the null method because the balanced position of the lever is not changed. The other three methods are premised on the fact that the measurement mechanism is somehow displaced. Stated more clearly, they are like spring balances. The mass (load) displaces the measurement mechanism so this method is called the displacement method.

The lineup of electric balances that A&D designs and sells are mostly electromagnetic equilibrium and load cell types. Recently, the market has been demanding balances with higher resolution. One reason for this demand is the establishment of Japan Calibration Service System (JCSS) standards for calibration weights and scales. These standards have increased the need for mass comparators, balances that can calibrate counterweights. In addition, demand has risen for high-precision measurement management for production line measuring devices. These requests from new markets mean that there is a need for balances that can display values with an extra decimal place over current general-purpose balances.

These demands pushed us to develop mass comparators using the GX/GX-K Series of general-purpose balances, which use the electromagnetic equilibrium method. In fact, the ability to stably display an extra decimal place was confirmed when product development started 10 years ago. However, the difficulty of dealing with corner errors and achieving adequate performance over the entire weighing capacity resulted in the product being shelved as a general-purpose product. This time, thanks to a complete set of options like the auto-centering pan, the MC Series is able to handle these issues. The specifications of the four models available at launch are listed below, and the maximum resolution is 1/10,000,000.


Using the four models above, it is possible to perform calibration of standard weights from 500 g to 20 kg, which are OIML standard F1 level or lower (F2, M1, M2). We intend to expand our range of models of high-resolution balances to meet future market demands. We hope these new products are used not only as mass comparators for calibration weights, but also as equipment for testing and research, new fields in which Japanese companies are strong, and for quality control and production lines in production facilities. This will help create new measurement instrument markets and contribute to improved quality and productivity in the workplace.