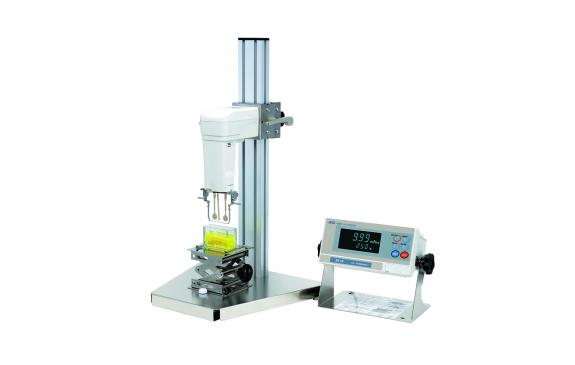 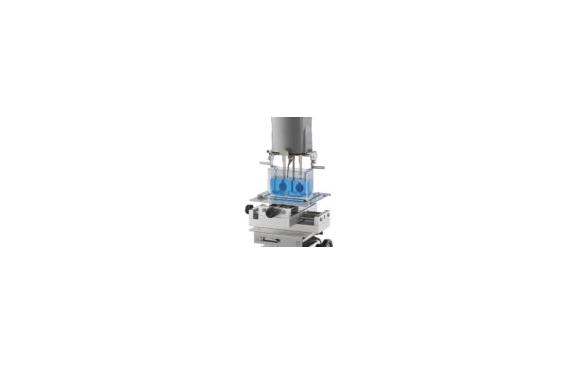 Learn about WinCT-Viscosity for the SV Series here.

Story 5: Development of the SV Series of Tuning-fork Vibro Viscometers

A tuning fork vibration viscometer is not the kind of product you hear of very often. This is not surprising since, while there are many viscometers available, A&D is the only company in the world making and selling viscometers based on our unique tuning fork vibration technology. Viscometers in labs and research facilities are typically capillary or rotational types. Several companies make vibratory viscometers for production lines, but these use a rotary reciprocating motion with a high frequency of several kHz. Only A&D makes a model that uses a low frequency reciprocating motion like a tuning fork.

A tuning fork generates sound using the phenomenon of resonance at the same frequency. A tuning fork-type viscometer resonates its sensor plates at a natural frequency like a tuning fork and determines viscosity from the drive force (electromagnetic force) required to maintain constant amplitude. This method gains its high sensitivity from its tuning fork structure.

Technology to resonate an oscillator at the relatively low frequency range of 30 Hz was difficult to develop and had never been used in a product, even more than 50 years after the theory was developed. About 20 years ago, a cement company proposed a viscometer using this method and then about 15 years ago joined with A&D. By that time, however, the person responsible for the development was no longer with the company and work on the technology had stalled.

At that time, the product was still in its early stages so its viscosity measurement range was narrow and its cost was high. As a result, only about 10 units were sold a year. Later, another section within the company spent about 5 years trying to redevelop the technology but failed to complete a finished product. Then one day, the company president came and asked me to complete the vibration-type viscometer and so our section took up development of the viscometer.

When we first started development, things were a bit like a scavenger hunt. In the remains of the troubled project, we found a few completed items, like die assemblies. In the end though, most of the non-structural, technical elements had to be newly developed. Thankfully, our department was able to apply the technical expertise it had gained from developing digital balances. We were able to adapt the fulcrum used with digital balances and reused balance technology for the voice coil elements of the electromagnetic drive member. One particularly difficult area was the electronics. Even here, we were able to adapt the high resolution A/D converter technology of our electronic balances to achieve a high level of sensitivity. In the mass production stage, we struggled with issues such as getting a resonance point of 30±0.02 Hz, but ultimately we leveraged our electronic balance production technology to produce a new viscometer that had the same high accuracy and low cost as our balances.

The target viscosity measurement range was 0.30 to 10,000 mPas, with a minimum and maximum display of 0.01 mPas and 10,000 mPas, respectively. Technically speaking, the resolution was 1/1,000,000. There had never been a viscometer with such a high resolution, nor one that maintained a low viscosity sensitivity of 0.3 mPas and yet whose measurement was easy and stable.

After we completed the development described above about 6 years ago, we started selling the SV Series of tuning fork vibro viscometers as a new type of viscometer. There was quite a bit of skepticism toward this new type of viscometer as a general-purpose viscometer and the series did not sell well in the Japanese market early on. However, there were researchers who were unhappy with existing products and they quickly accepted the new viscometer, thanks to its ability to measure a lower level of viscosity and perform consecutive viscosity measurements over temperature changes and state changes from liquid to solid, which other viscometers had been unable to do up until that time.

The series was also well received in the European and other foreign markets. A manufacturer famous for measurement devices for particle size distribution found them excellent as a viscosity measurement method for base materials that determine Brownian motion, and SV was quickly set up as an optional device. As a result, the SV Series gradually gained acceptance as a viscometer. In the last few years, the SV Series has been recognized as part of the viscometer market, which is attested by the fact that, for example, the series is a recommended measurement instrument for oil viscosity at a leading oil company in Japan.

Our tuning fork vibro viscometer is already listed as a measurement instrument compliant with Japan Calibration Service System (JCSS) viscosity standards and the process for Japanese Industrial Standards (JIS) standardization is underway. Furthermore, we have proposed that the physical value measured by vibratory viscometers (viscosity x density) be described as “static viscosity” to distinguish it as a new concept separate from the established values of kinetic viscosity and viscosity.

A&D has considerable experience pioneering and expanding Japanese technology overseas. Considering that this tuning fork vibro viscometer was developed from unique technology developed in Japan and that the vibration method can measure a new physical quantity (static viscosity), we believe it best to quickly establish standards in Japan first. After that, we would like to proactively promote this new method to the rest of the world and let people know about the measurement abilities of our tuning-fork vibro viscometer.