Small but mighty - a user friendly balance that fits any budget 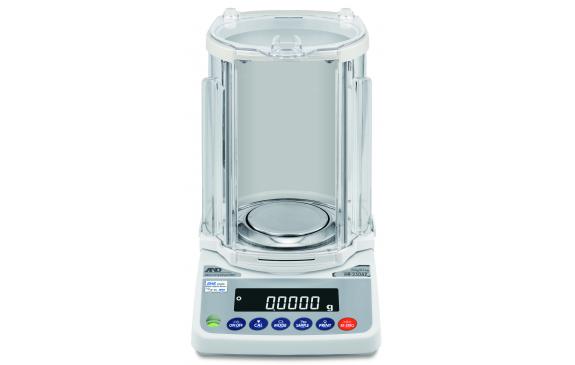 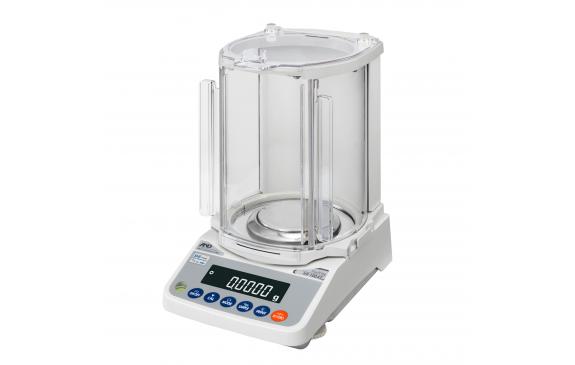 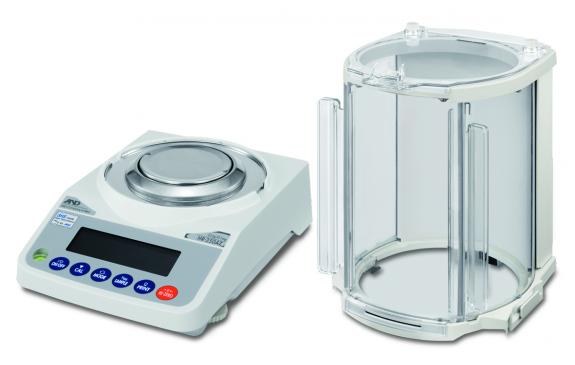 The breeze break detaches in seconds, even with heavy gloves. This makes cleaning easier and enables top-loading operation.

The 2-second stabilization time increases productivity by delivering fast results. The HR-A/AZ lets you perform frustration-free weighing down to a resolution of 0.1 mg.

The rugged, shatterproof breeze break with anti-static coating makes the HR-A/AZ safe for FDA applications, but beyond environments where contamination is a concern, this Analytical balance is perfect for laboratory, quality control and production environments that require performance in a compact footprint. 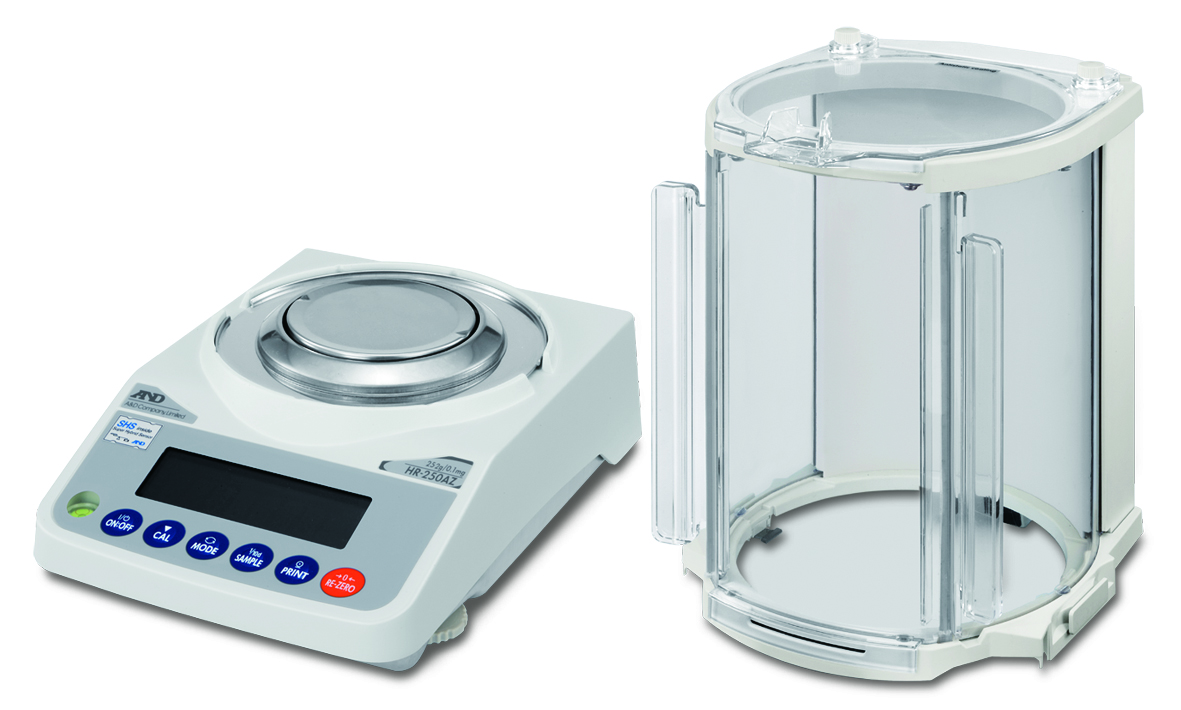 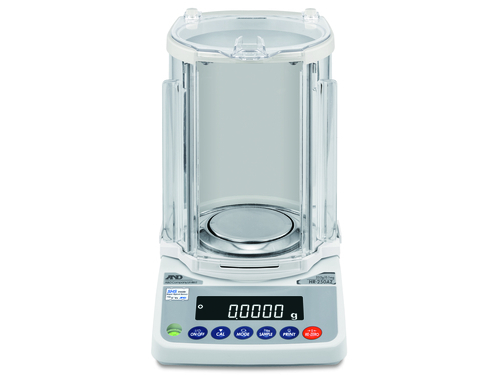 Rotary doors mean that the balance takes up no extra space when the doors are open. The HR-A Series is perfectly at home in the tight confines of glove boxes and fume hoods. Crowded academic lab benches are no problem: set-up 2 balances back-to-back.

The top of the breeze break also pivots open, so access to beakers and flasks is easy.

Space Saving with Safety in Mind 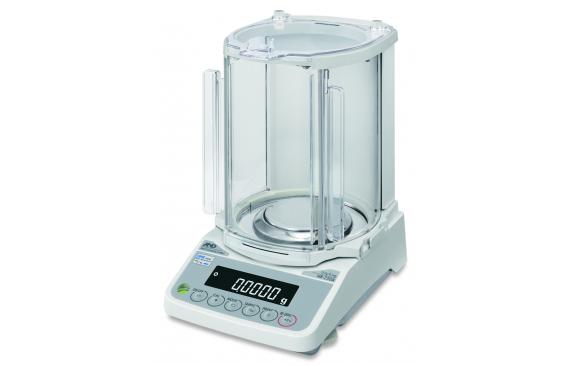 In the measurement instrument industry, all weighing instruments are called "scales". Within the category of "scales", instruments that have a fulcrum in their mass sensor section and a mechanism to balance the object being weighed via the fulcrum are defined as "balances". Balances can weigh the lightest weights among weighing instruments. A high resolution (capacity divided by minimum display) can be achieved thanks to the mechanism to counterbalance the object via a fulcrum and return the beam that is supported by the fulcrum back to its original balance point – a function commonly called the zero method.

As you know, standard analytical balances have a capacity of 200 g and a minimum display of 0.1 mg. For example, weighing in the pharmaceutical industry for Chinese herbal medicine and Western medicine is performed with a minimum display of 10 and 1 mg, respectively, so balances have historically been required to have one more digit of precision in their measurement performance, or 0.1 mg.

Let's consider the resolution of a standard analytical balance like the one above with a specification of 200 g × 0.1 mg.

We can better understand the high resolution of an analytical balance using length as an example. The distance between Tokyo and Osaka is 500 km. Therefore, 1 dig at 2 million to one can be calculated as follows:

If we used Mt. Fuji as an example, the increment is as follows:

In this case, if we were to slice Mt. Fuji by height into 2 cm slices (about the width of a thumb), the balance would be able to detect each slice. From these examples, we can see that determining the minimum display digits of an analytical balance is not easy.

After that slightly long introduction, let's return to the development of the HR-AZ/HR-A series of analytical balances. As we mentioned in another installment, the current HR series was developed around 20 years ago as our first top-loading analytical balance. At the time, an analytical balance meant an instrument with a large mass senor in the back and a weighing chamber in the front. This type of balance had an extremely large mechanism so it had a high heat capacity and the magnetic circuit to generate balancing power was powerful so its lever ratio was small. Because of its high thermal stability and performance, it is still well regarded as a high-precision analytical balance. In terms of sales volume, however, the top-loading, general-purpose balance systems that first came out 20 years ago are now mainstream items even in the case of analytical balances.

The HR series, which pioneered top-loading analytical balances, became a very long-selling product that continues to sell today, even after its contemporary competitors have long since disappeared. However, it is true that as the years have passed, its liquid crystal display and overall design have made it seem a little old. Furthermore, analytical balances are involved in a fierce price war outside Japan, particularly in Asia, and the HR series has long been due for a price and feature refresh.

Under these circumstances a long development process started. Since the cost of developing a new mass senor would be in the hundreds of millions of yen, I initially thought it would be best to repurpose an existing sensor. I came to the easy conclusion that if we reused a sensor, it would be relatively easy to come up with a new product in terms of time. Consequently, we started development of a new analytical balance with 1 dig at 0.1 mg using the C-SHS mass sensor developed for general purpose balances. The C-SHS sensor developed for the FZ-i/FX-i series has excellent span stability and other performance features, and I thought that it would be possible to get the performance we needed quickly.

However, once we started, we struggled hard to achieve reproducibility at 0.1 mg. When I look back now, I can see that I didn't realize that we needed to develop breakthrough technology in two areas: the sensitivity of the machine parts that make up the sensor and the electronic circuits of existing general purpose balances.

We spent hours achieving basic performance. We changed the way we processed parts to overcome processing limits and tested repeatedly to limit the variation caused by the individual differences in characteristics of the electrical parts. After repeated confirmation testing and discussions, we managed to reach our product goals. Nevertheless, it took three full years from the start of development to reach the sales stage.

While I had plenty of experience developing new products by this time, when we hit the required level of performance after a long period of resignation among the development team, it felt like we had finally found the light at the end of a long tunnel that we thought was a dead end.

For the newly developed HR-AZ/HR-A series of analytical balances, we raised the capacity of the existing HR series of 200 g to 250 g and achieved a high-speed response with real-world weighing stabilization of 2 seconds. For the display, we used a reverse-backlit LCD for visibility of weighing values in low light settings. The AZ series uses a highly reliable internal calibration weight mechanism that employs a unique operation method. The breeze break comes as standard and detaches with one touch for ease of cleaning and operation without a breeze break. Furthermore, all components of the breeze break are made of plastic and coated with a durable antistatic coating. These features were added to solve two issues: static electricity, the most troublesome aspect of using an analytical balance, and requests for a glass-free product, which is required for medicine and food production lines subject to FDA/HACCP regulations.

The breeze break also offers installation advantages, such as the ability to set up the balance with its rear surface close to the wall, since its doors do not come out at the rear of the balance when the side doors are opened. In addition, the balance can be embedded in an automatic production line and placed in a particular isolated space thanks to the one-touch, removable breeze break and the compact size of the balance.

While it took longer than expected to develop, we believe we have created a balance that is unprecedented in price/performance ratio, simplicity, compactness, and usability. As a result, we expect the new HR-AZ/HR-A series of analytical balances to offer users a number of convenient features that create opportunities for weighing in new fields and open up new markets.