Weighing Up the Benefits of the HT-CL Traffic Light Scale

Weighing is one of the most fundamental metrics at the core of manufacturing processes; particularly in the packaged food and fresh produce sectors. An emerging trend during the current SE Queensland Strawberry season that shows how looking at weights in a different light (or lights in this case) can improve product yields with some staggering results. Other fresh produce sectors and manual packing operations can apply the same improvement for potentially massive gains.

With escalating costs, and downward pressure on product prices, it’s vital to seek simple ways to increase productivity. In the fresh fruit and vegetable industry, many companies rely on manual packing processes, often utilizing casual labor to pack into punnets/boxes/bags ready for supermarket consumers. Labor is typically the biggest cost to a business, but there is another that can go unmeasured – the cost of extra produce given away in overfilled packs. This can add up to thousands of dollars per week and some local packing sheds are reducing this “giveaway” with one simple change – utilizing traffic light signals on their packing scales rather than staff focussing on the numeric weight display. 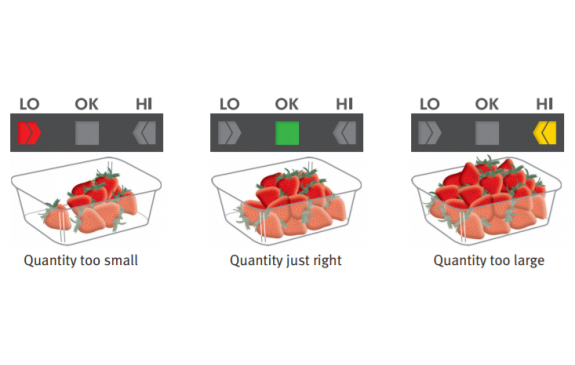 People respond to signals with far less thought process than looking at numbers. Green means “GO”, Red means “STOP” – it’s part of everyday life, transcending language and cultural communication barriers. By utilizing packing scales that have a target-based signal system, packing staff and management alike enjoy immediate benefits; stringent fill targets can be set for both upper and lower weight bands. Packing staff are able to quickly fill and check that products are correct, and the increased visibility of red/green lights means management can easily oversee performance.
Many modern electronic scales have the capability to send outputs to lights or buzzers although a lot of users may not realize this functionality exists. It’s certainly worth checking with your local scale supplier/manufacturer. At several large Strawberry farms/packing sheds in recent months, a lot of “kitchen scales” have been replaced with packing scales, like the HT-CL Compact Scale, that incorporate this type of target signal technology, historically limited to more sophisticated and costly models.

Braetop Berries near Queensland’s Glasshouse Mountains were staggered to find that re-checking several cartons of traditionally packed punnets, produced several extra punnets of fruit when using traffic light scales. This was “money in the bank” according to Father and son team, Peter and Aiden Young. Another local berry farmer, Terence Roy from Coolhaven Farms cites improved packing speed as another instant benefit – “Our packers work more efficiently since using the light signals on our new A&D HT-CL scales – it’s made significant improvements to our productivity in both speed and reduced re-work of out of spec punnets” One of WA’s largest Strawberry producers “Berry Sweet Farms” has been ahead of this curve for some time – last year they replaced regular scales with ones that had LED’s built-in, prompting packers when correct weights were reached. Owner Anthony Yewers has not looked back since; “Preventing underweight punnets is essential to our business and customers, but reducing extra giveaway is a no-brainer – using traffic light signals in our packing scales has put a big tick in both these boxes” Whilst the above examples are from the berry industry, the “packing by lights” principle is valid for any manual packing process where weight targets are set. The Table Grape industry uses exactly the same process in the field where fruit is picked into 9kg or 10kg boxes and also in packing sheds where punnets or bags are produced. Julian Horsley, from Japanese scale manufacturer A&D Weighing, provided some further insight, “Scales with target-based outputs like traffic lights have been around for a long time – typically in more sophisticated models for automated processes. Recently we’ve seen this type of feature added to lower-cost packing scales, making it a viable option for packing sheds that often have dozens of scales. Along with inline check weighing & data capture, scales with target-based lights are our biggest area of demand at present. With supermarkets pushing for more pre-packed fresh produce in Australia, we expect this to be a focal point for some time as growers and packers look to improve speeds and reduce giveaway.”

Check out HT-CL for yourself